We were recently contacted by a PR company who asked whether we would write a blog post about Domino’s Pizza in return for a free meal, initially I refused as I have just had a gallstone attack that left me in hospital. Now I know from experience that Domino’s Pizza doesn’t really give me an attack as I have had it before and I am pretty certain that only Chinese takeaway causes me to have an attack as the last time I had Chinese I had very similar pain (was only diagnosed a few weeks ago with gallstones). 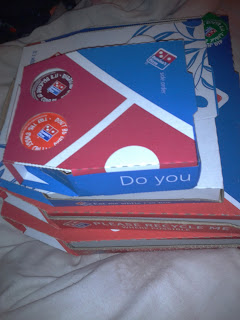 I then remembered that they have reduced fat cheese! Well I thought I might as well try, especially since my fiance has been working so many hours recently, it would be a nice treat for him…and me, especially if it didn’t give me pain afterwards.
So I contacted the PR company back and the offer was still there so I made an order using their online ordering system. There is quite a few things for me to have on their pizza menu.
Russ had the Gourmet Garlic Bread and wedges to start (I had a few wedges). I had my own pizza with the reduced fat cheese with mushrooms and sweetcorn and Russ had the Vegi Volcano. We enjoyed it all. Needless to say I didn’t eat all of my pizza and Russ had a bit of mine too. Not all was eaten of his or mine but most of it was.
We both had Ben & Jerry’s Ice Cream too. Chocolate Fudge Brownie – yummy! I have no idea how I got away with eating this but I did! Dairy is not very good for gallstones! I had my painkillers to hand. We had a bottle of Coca Cola too.
I am not saying that people with gallstones should risk eating Domino’s Pizza and certainly shouldn’t risk ice cream, I was a little bit naughty but I have been very good since the attack and desperately needed a treat! I was very very lucky.
All of the food that we had was very nice and well cooked. Even the potato wedges were good this time. We have had Domino’s wedges before where they were a little bit undercooked but these have improved.
Domino’s you have been missed! Thank you!
So visit https://www.dominos.co.uk/ to make an order!