Well what can I say about our trip to Burnley to see Chris and Pui at the Burnley Mechanics?! It was amazing! The best day out so far for many reasons.

Miss A loves many programmes on CBeebies but Show Me Show Me is the only programme where she doesn’t to anything apart from watch it. It is her favourite programme, I think.

It was my second day out of hospital, three days after my operation (I am OK by the way, slowly recovering and expect to get my results in a weeks time), I had my doubts that I could make it but I really pushed myself and made it. I was so pleased that I did. Seeing Miss A’s face when Chris and Pui came on stage. I nearly cried! She was amazed.

The whole show was fantastic.

I overheard some people saying it was not in the style of Show Me Show Me. Personally I am glad that it wasn’t. They were dressed in the nursery rhyme character costumes that they have on Show Me Show Me, that was superb, especially Incy Wincy (Miss A’s favourite!) and also appearances from Stuffy and Miss Mouse. I think it would be a bit boring if it was the same as what was on television, Miss A sees that every day!

I loved the fact that at the end of the show Chris and Pui came out and gave out autographs and allowed parents to take pictures of them and their children and spent some time talking to each and every child. That means the world to the children, it did to Miss A. As you can see by this picture, Miss A was absolutely amazed! 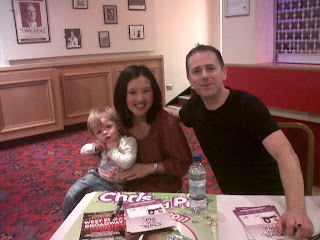