I was kindly offered an invitation to go to the Total Greek Yoghurt I Love My Lunchbox event in London but I couldn’t go but I promised that I would put something on my blog about it. Here are a few pictures and recipes from the event and also part of a press release about the survey that Total Greek Yoghurt carried out. 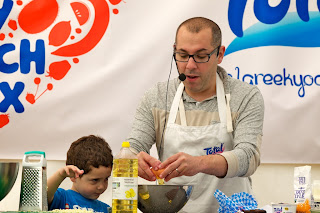 TOTAL Greek Yoghurt surveyed 2,000 mums across the UK on the trials and tribulations of making school lunchboxes for their children. Whilst school dinners have improved in quality – thanks to chefs like Jamie Oliver – 60% of parents still choose to make a packed lunch for their children.

Likeability ranked as the most important factor, followed closely by Nutrition and Cost. In fact, half of all mums that pack a lunch for their children do so because their child simply doesn’t like school dinners. Concerning is, however, that 47% of mums do not know which foods enhance their children’s productivity or energy levels.

Nick Coffer – author, radio presenter and food blogger of My Daddy Cooks – said: “It is understandable that parents are confused. As well as being concerned about giving their kids what they need at school, there is so much conflicting advice and with preparation time being at a premium and cost being so important, it is really tricky to know what would best add a bit of variety to a lunchbox.” 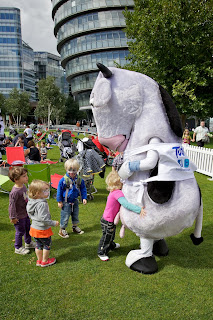 TOTAL Greek Yoghurt’s survey also discovered that a quarter of mums have found evidence that their children swap parts of their lunch for less healthy snacks. As one mum stated: “It’s all very well including a selection of raw vegetables in the lunchbox but if my child doesn’t eat them because he doesn’t like the taste, then he’ll only go on to find less healthy snacks somewhere else.”

If children had free reign, the top four foods they would include in their lunchbox are: 1) crisps 2) chocolate 3) sandwiches and 4) yoghurt. Mums, on the other hand, choose 1) fruit 2) sandwiches 3) yoghurt and 4) fruit juice.

“I think it’s all about finding a balance between giving your children plenty of goodness in their lunchboxes while at the same time making sure they are getting treats that they will enjoy,” continued Nick. “After all, they will have plenty of energy to burn at school and that’s where some cleverly devised treats can really come into their own.”