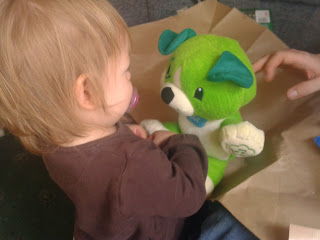 Leapfrog kindly sent me My Pal Scout for us to review.

What can I say about this toy….we ALL love it! I love it, Russell loves it and the most important thing of all, Miss A loves it!

We didn’t connect it to the computer until the next day as we wanted to surprise Miss A so she got used to it not saying as much as it would after being connected and the extra functionality adding.

The next day, once we downloaded the software (my goodness this did take a long time BUT the internet connection in this house is terrible. Thanks Virgin Media!), we selected her name and the choices that were appropriate and then gave it to Miss A. She cannot press the paws herself yet for some reason, even though they are really easy to press so we have to do it for her. She will learn I am sure. The first time that Scout (she knows his name already) said her name she looked so surprised, I wish I took a picture at that precise moment. She then gave him a big cuddle.

The batteries on Miss A’s mobile ran out and I didn’t have any more but thanks to Scout, he sent her to sleep. He is a distraction though as she loves him so much so I have gone back to using the mobile.

I must admit, I have seen My Pal Scout in shops and I have ignored him, for that I am sad that she has not had him since she was six months, but now she has him and he is loved.

My Pal Scout can teach a child so much. Counting, what sounds animals make, songs and it also helps put them to sleep. Scout is so soft and I have been known to give him a cuddle too. I have a lot of love for him. He puts a smile on Miss A’s face. She cuddles him every time.

One thing I have noticed is that when Scout is on the lullaby setting, he does crash sometimes. It does not happen all the time but it means that I have to go back in Miss A’s room, turn him off at the switch and turn him back on again. I think it has happened about five times now and we have used this mode about fifteen times now. It is a minor issue and the fact that it doesn’t happen all the time, it is OK.

Update: 06/09/2011 Scout has not crashed since this was written so hopefully it was a temporary problem. I have gone back to using the lullaby function for her naps. Also Miss A is saying the vowels in her name in the correct order (not the first letter but she is saying _ _ e _ie and sometimes saying the l. How fantastic is that?! I love Scout even more!

My Pal Scout is a superb toy and for £19.99 it is superb value. It is a fantastic toy which is suitable from 6 months.

More about My Pal Scout can be found on the Leapfrog website. 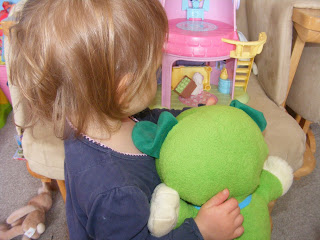 Miss A and Scout…the best of friends