I would like to tell you all about Copella’s Plant & Protect campaign.

2011 apple market data revealed that the iconic Cox, alongside over 50 other traditional English apple varieties are in decline due to purchasing habits which indicate a desire for the more aesthetically pleasing foreign varieties.

In response to this, Copella, as the champions of English Apples launched the Plant & Protect Campaign – calling on Britons to take action and pledge to protect all varieties of English Apple at Copella Fruit Juices

Copella is working with the National Trust and Dr David Bellamy to raise awareness of the English Apple. Encouraging consumers to buy English, try other English varieties and even plant English Apple trees in back gardens across the country. 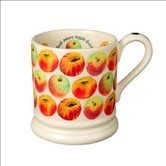 Copella’s Plant and Protect campaign is supported by Emma Bridgewater, David Bellamy and The
National Trust.

The limited edition mug is available to buy at Copella Fruit Juices priced at £17.95.

I would like to ask you to go to Copella’s Plant and Protect page and pledge your support they work closely with orchard experts to Plant & Protect native varieties at specialist National Trust orchards. I have!