I received a Baba + Boo reusable nappy to trial and review. I received a orange nappy. the nappy has two inserts. I tend to use both inserts all the time. It does pad the nappy out a bit but that can’t be a bad thing as Miss A is falling on her bottom quite a lot recently!

I was rather impressed with the quality of the nappies. I love the fact that there are press studs instead of velcro. Miss A has a habit of taking off nappies that have velcro. 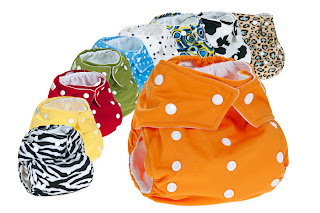 The fit of the nappy was rather good. I did however make the nappy too tight at one point but that was my fault (poor Miss A!)

The cleaning of the nappy was excellent.Getting the nappy ready to be put in the washing machine is excellent. Some nappies that I have used have a pocket that has a flap over the insert, this has the pocket at the seam at the back of the nappy and is elasticated which conceals the inserts. Miss A is teething at the moment and her poo is rather yucky and I often find that with the nappies that have a flap means that you can get your fingers messy. No messy fingers with Baba + Boo nappies! Superb!

I have air dried and also tumble dried the nappy and I think I will stick to air drying the outer and tumble drying the inserts. The outer dries very quickly without tumble drying. Some nappy outers that I have cannot be tumble dried so the Baba + Boo outer will join them.

I will hopefully, in a couple of months time, be trying for another baby so I will need some more nappies. I was very impressed with these nappies and I will definitely be buying some more! If only I knew about these nappies when I bought Miss A’s! Oh well!

More about Baba + Boo nappies can be found on the Baba + Boo website.