Well hello there, welcome to my sometimes mad world! My name is Kelly and this is my blog. This blog will contain a mixture of things but the main part of this blog will involve our daughter Miss A. This is a picture of Miss A which was taken a couple of months ago: 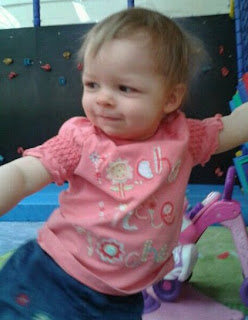 Well this is my first blog post and I need to start somewhere. So I will start with the film we saw at vue cinema in Preston yesterday, Winnie the Pooh.

Miss A has not seen Winnie the Pooh before, certainly not on television. Apart from being a bit fidgety and tired, she did watch most of the film and she seemed to enjoy it.

The storyline was really good! Pooh was as hungry for honey as ever, his rumbling tummy really made me laugh! Eeyore was as gloomy too as he had lost his tail. The other part of the story was Christopher Robin leaving a note outside his place and it being misinterpreted. It said “Bizy Back Soon” and they thought it said “Backson” which was apparently a monster who has abducted Christopher Robin. So they all went on a mission to save Christopher. All was well in the end, Christopher Robin came back from where he went, Eeyore got his tail back and Pooh got a big pot of honey for finding Eeyore’s tail.

We all enjoyed it, really took me back to when I was a kid. It has made me want to make sure that Winnie the Pooh is part of Miss A’s life. So I think I need to see if I can get hold of a DVD or two of the older episodes (as well as this film too).

This was the second time we have been to the cinema since Miss A arrived. The first time we went was to see Tangled. Now that is a magical film too. Disney makes some wonderful fims!

It will hopefully be a regular thing, going to the cinema especially when vue has got a cartoon-based film showing on their KidsAM screening! £1.25 each is superb value!